Surviving the Hype and Dangers of a Swell - Blarrel

Taken at Scripps during sunset Sunday evening before the swell arrived.

When the reports of a super strong swell forming around Alaska appear on the radar, heading directly in the angle of swell window for your local break, things get exciting. The days go by, and each surf report you read from different reporters or meteorologists or company begins to confirm the strength that has yet to come.

About a week ago, the wind report for December 17th and 18th didn't look great and I was pretty unsure how things would roll down.

Nick Ferreira on a bomb during the January 19th, 2018 swell earlier this year

Earlier this year in January we had an awesome week of waves. The Friday of that week, a single-day swell rolled through with a window of wind to turn on the morning.

As this past weekend began, the reports shifted the wind to good. The forecasts of rain were gone. The sun would be out. It was going to be on.

And I realized I was scared.

For the past five years I have been experimenting in the water and training to improve my surf photography as a whole. When you factor in big surf, It is a whole new playing game. Whenever the reports would go big, I would post up on the beach and tell myself that those were my limits. This year, however, I began pushing that bar for myself.

This week's reports were looking huge. Mavericks was going to run. Ocean Beach San Francisco was a death sentence. The swell was going to hit our local beach head on and conditions looked great. I was stoked. 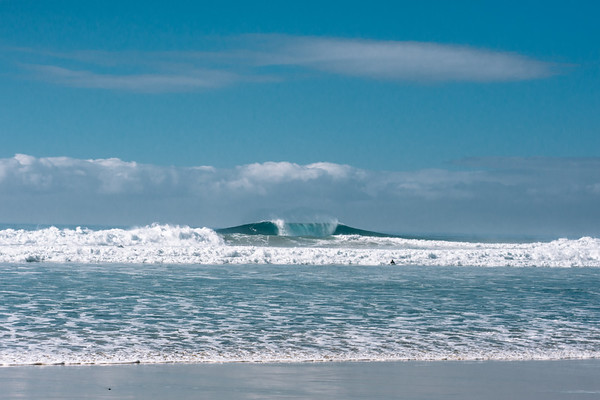 I slept in a bit on Monday morning knowing that the swell wouldn't really arrive until the morning progressed. Along with the massive high tide. It was a good opportunity to sit down and have breakfast with my girlfriend.

I ran down to the beach around 8AM and talked to some guys who told me that the surf is "slow" and "isn't really great yet" and "it never got big". You can't kill my vibe. The sun was out and I had the next two days off.

As the morning progressed, sets became more consistent and fun.

Then, right when I lowered my guard, it started getting big.

A little bit after I took the shot above, a wave crested over the horizon. Not a set, just one single wave. It had the size larger than anything I've seen in the water before. I was sitting in the wrong spot, inside of a rip that was holding me in the same place. The wave began to break and I thought I had a chance to swim as fast as I could to catch up to it and dive under.

I remember the crystalline blue sheen of the face of the wave as it soared tall in front of me. Suddenly all of the slow-motion thoughts sped up as the wave crashed down and I realized I was going to die. No other thought of how I was going to tell anyone goodbye. I'm dead.

I dove down deeper than I ever have before. I hit the bottom and then felt the whitewater tear my arms and legs, full-on ragdoll. I tossed. I found my balance and started swimming upward for what felt like forever. Three times the usual length of time it takes for me to come up from a larger wave. When I hit the surface, my only thought was "get outside". There was no other waves going out. It was calm. But the ocean humbled me like never before.

I have no photo of that wave, nor did any bit of me think to raise my camera to get a shot of it as it was breaking. But that light blue color of death is stained in my head.

I sat really far out to calm myself and catch my breath, then had some care-free shooting on the inside in a safer spot because I knew nothing would be as scary as that.

When I finally got kicked out of the ocean by another canyon set, I accepted the punishment and went home for some lunch. Cereal with the dog on the deck. Rehydrated.

I went back out to get some more shots in the afternoon. The light and winds were still perfect. Even the dolphins showed up. It was a gorgeous day.

I slept in a bit this morning to 7AM, but skipped breakfast and ran to the beach. I talked to my neighbor who had already surfed and was just getting out to his car. He said it was smaller. I got to the beach and into the water and the morning started off good. Then it started getting really good.

It only makes sense now looking back at the pictures that it definitely got bigger, better, prettier today. I got beat up a few times, but it was so good that it just motivated me to swim harder and get into the right spot.

During the photo above, I felt my whole body inside sink. I was almost sure that I was going to get eaten by this one. My camera misfocused a bit and the lighting is pretty off, but it really shows what was happening.

Today was the most fun I have ever had shooting surf to this date. I learned so much more about the ocean and myself in the past three days.